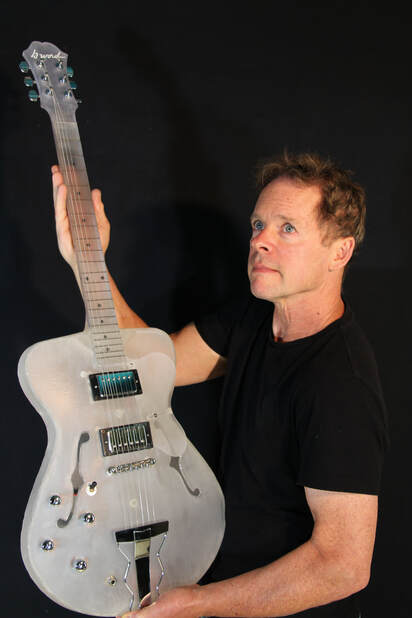 Gary Word was raised along with three brothers on a farm outside of Olympia, Washington.
His natural artistic abilities were evident at age five.  At age eleven, he executed his first formal works on canvas.
His 20s were a time of exploration in various media and subject matters.  This period coincided with his move to Seattle in order to seek out a wider array of opportunities, both in the fine arts and in modeling.
While doing temporary work, Gary continued to grow his number of contacts in the art world.  Through one such contact, he was inspired to work in clay.  It is in this medium that he produced his first important series, one based on the human form.  This work in clay culminated in a group show at the Patricia Rouser Gallery in Kirkland, Washington.In 2000, his interest turned to glass.  Largely self-taught in this medium, his emphasis because fused glass, a process in which casts are sculpted in clay.
His time spent with glass was a prolific one of twenty years, with the creation of pieces ranging from wall sculptures to freestanding works.  Many of these pieces are illuminated.
The culmination of this work in glass was the design and production of fully playable glass
guitars and classical string instruments.  These instruments were featured in many venues, ranging from the Museum of Glass in Tacoma to clubs and arenas to art galleries.
As a result of the pandemic in 2020, Gary, like other artists, was forced to rethink his artistic vision,.  This rethinking resulted in six months’ intense exploration and the subsequent return to the canvas in a unique series combining cubism with the works of da Vinci.
This series, the “Madame” series, is the subject of Gary’s first solo show in Seattle, which will be held at the Lynn Hanson Gallery in February, 2022.  I April 01 22  a solo show will be at at Gary Manuel Salon 528 Second Avenue in Pioneer Square,  Seattle.     More shows are being scheduled in 20222 and 2023.