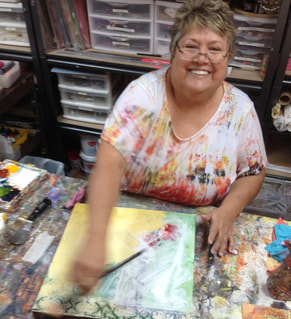 Sue Robertson works primarily with acrylic and encaustic.  Her style is loose and very colorful, with multiple textures.  Sue considers herself an experimental painter and she often incorporates elements such as ink, graphite, paper, clay and whatever other things she happens across.  Whether she is painting figures, still life or abstract, the subject is simply a vehicle for the color and stroke.  Working from her imagination, she goes wherever the painting takes her and often works on several paintings simultaneously.  She calls her work Joyful Art because creating it brings such joy to her.

Sue has had the opportunity to study with several gifted instructors, and continues to attend workshops whenever possible.

Sue has shown her work at various galleries in the Seattle Metro area and has participated in local art festivals and juried shows.  Her work shows at ARTspot in Edmonds, Artisan Framing in Mill Creek and online at Hanson Scott Gallery an ongoing basis.